This tour offers an opportunity to be part of the nationwide celebrations that take place each March to honour our patron Saint Patrick. You will get to experience the special atmosphere of a St. Patrick’s Day Parade and the celebrations and culture that form part of this uniquely Irish festival. You will also get to see some of Ireland’s most dramatic scenery as you visit places closely associated with St. Patrick’s epic life story and huge contribution to Irish history. You will travel in the comfort of your own luxury touring vehicle with on board Wi-Fi, while your exclusive driver/guide informs, entertains and takes care of every aspect of your very special vacation in Ireland so you can relax. As with all my tours, there will be time to sometimes take the road less travelled and experience real Ireland and its people. 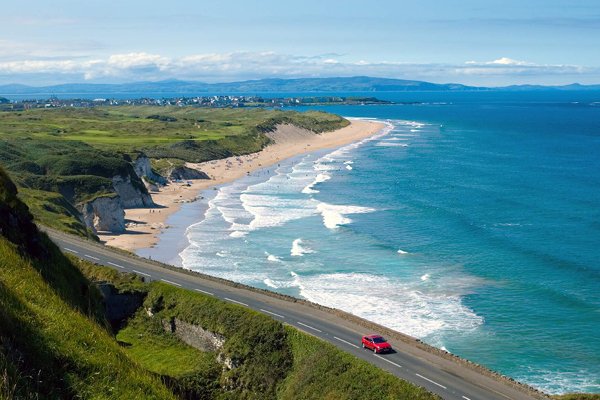 All our Ireland tours include:

A private luxury airport transfer vehicle will be arranged to bring you to your hotel in Dublin City for some rest and relaxation after your flight. Ireland’s capital has a fascinating history stretching back over 1,000 years. It is also where you will find the largest medieval church in Ireland with its soaring 14th century spire – St. Patrick’s Cathedral. Another must see while in Dublin is the Book of Kells at Trinity College. This lavishly illuminated book dates from the 9th century and includes the four Gospels of the new testament. Your guide will then explain how such books helped Ireland earn its reputation as ‘The Island of Saints and Scholars’.

Day 2: Dublin to Monasterboice and the Hill of Slane

This morning you will visit Monasterboice and an early Celtic-Christian monastic site to marvel at two elaborately carved Celtic Crosses and a well preserved Round Tower. Then from atop the Hills of Slane and Tara you will hear the compelling story of how St. Patrick challenged the then High King of Ireland and his druids by lighting the first Paschal fire on the Hill of Slane. A short distance west of Tara is the hilltop village of Skryne where stands the ruins of a large Medieval church. Your driver/guide will share the amazing secret history connected to this site and one of St. Patrick’s most charismatic successors.

After a visit to Cathedral Church of St. Patrick in Trim, you will be chauffeur guided across the pleasant pastoral countryside of Ireland’s midlands. Your destination will be the ancient monastic city of Clonmacnoise, situated overlooking a wide bend on the River Shannon. Clonmacoise reveals the epic story of how St. Patrick’s fearless missionary work would set forth the Celtic-Christian Golden Age. This was a time when scholars and philosophers travelled to Ireland to escape the Dark Ages. You will also be shown an Esker, which early pilgrims used to traverse the marshy landscape.

After an overnight stay in Galway City, you will visit Europe’s youngest stone built cathedral. Galway Cathedral was built in a magnificent Renaissance style of architecture. You will then take a boat cruise from the picturesque village of Cong to visit Inchagoill island on Lough Corrib. Local tradition maintains that the ruined church on the island was constructed by St. Patrick and his nephew Lugnad, who was credited with bringing him back to Ireland by boat. Nearby the church you will see a very enigmatic stone called Lugnad’s pillar, which bears the oldest known inscription in Ireland in the Latin alphabet. Back in Cong, you will visit the enchanting ruins of Cong Abbey and the Monk’s Fishing House. A spectacular late afternoon scenic drive through Connemara’s wild landscapes then awaits before arriving in the picturesque town of Westport.

Croagh Patrick is Ireland’s holiest mountains and has been for thousands of years. In the year 441 AD, St. Patrick is believed to have fasted on the mountain for 40 days and 40 nights. On the last Sunday in July each year, thousands of pilgrims of all ages flock to Croagh Patrick to climb the sacred mountain in an act of devotion. You will visit the trailhead and also see a very poignant Famine memorial. From Westport you will be chauffeur guided to the Knock Pilgrimage Centre and National Marian Shrine, where in 1879, an apparition of Blessed Virgin Mary was believed to have appeared to local parishioners. Your tour then heads Northwest to County Donegal, through the spectacular mountain landscapes and Atlantic coastline of County Sligo.

Visit Today will be designated a day of rest and reflection with the only activity and travel being a short drive and boat trip out to the world famous pilgrimage island on Lough Derg. You will hear the extraordinary history connected with this ancient pilgrimage from your chauffeur guide. There will also be ample time given to walk around the island, visit the churches, gallery and small gift shop, and meet with the Prior of Lough Derg, Father La.

This morning you will be chauffeur guided through the scenic Northern Ireland countryside to visit Armagh City. Known as the Cathedral City, it can boast two magnificent cathedrals dedicated to St. Patrick, which we will stop and visit. Just over an hour’s drive from Armagh is the St. Patrick Centre in Downpatrick. This impressive, interactive permanent exhibition is the only one in the world dedicated to retelling the incredible story of Ireland’s famous patron saint. Nearby is the medieval cathedral of Down and could there be a more poignant way to complete your tour than by visiting the grave of St. Patrick after a full week following his footsteps across Ireland.

Your personal chauffeur/guide will ensure that you enjoy a smooth direct transfer with ample time for pre check-in before your flight departs today.

Send us an email to: info@irelandguidedtravel.com